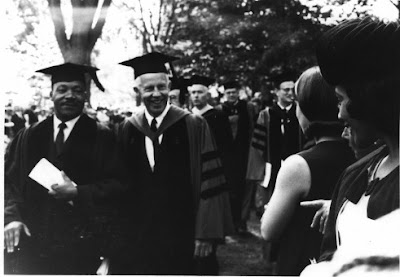 "And we still see, in certain sections of our country, violence and man's inhumanity to man in the most tragic way. All of these things remind us that we have a long, long way to go. For in Alabama and Mississippi, violence and murder where civil rights workers are concerned, are popular and favorite pastimes."

It has been more than 45 years since Dr. Martin Luther King, Jr. was assassinated.  He died, like many others, in the struggle to make this country a more equitable place. Today, let's take a moment to remember and honor their sacrifices by focusing on the current efforts to bring justice to numerous unsolved Civil Rights Era cases.

Sadly, unless action is taken, the Emmett Till Unsolved Civil Rights Crime Act is due to expire in 2017. Many cases may go unsolved or receive a cursory investigation.  These are not easy investigations since all of these crimes occurred more than 40 years ago.  Some of those involved have died or are elderly. In some cases, investigators have encountered a code of silence and complicity by then local law enforcement in the violence. This is evident in the 2011 60 Minutes report by Steve Kroft on the unsolved murder of Louis Allen in Liberty, Mississippi in 1964.

The fight continues to remember this history.  Three American universities are at the forefront with departments dedicated to investigating Civil Rights Era crimes.

The hard work of these university students and professors reminds me of Dr. Martin Luther King, Jr's words in his 1965 Oberlin commencement speech, which you can read in its entirety here. I will leave you with another quote from that speech, in honor of Dr. King and all those who continue to carry the torch:

"Let nobody give you the impression that the problem of racial injustice will work itself out. Let nobody give you the impression that only time will solve the problem. That is a myth, and it is a myth because time is neutral. It can be used either constructively or destructively... It comes through the tireless efforts and the persistent work of dedicated individuals. Without this hard work, time becomes an ally of the primitive forces of social stagnation. So we must help time and realize that the time is always right to do right." Dr. Martin Luther King, Jr.