Do You Recognize This Voice? The Amber Tuccaro Case 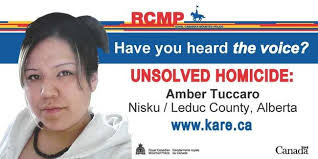 Amber Tuccaro was 20 years old when she went missing from Nisku in Alberta, Canada on August 18, 2010.  At the time, Tuccaro was traveling with her 14 month-old son, and a female friend.  They were on their way to visit the city of Edmonton.  In order to save money, they planned on spending the night in a motel in Nisku.

Tuccaro decided to go ahead into Edmonton that same night. She left her son with her friend and hitchhiked. She was never seen alive again.

A conversation she had on her cellphone may have captured the voice of her killer.


Do You Recognize This Voice?

When Tuccaro did not return the next day, she was reported missing.  Police discovered a recording of Amber's last phone call. While an unknown man drove her, Amber spoke to her brother, who was being held at the Edmonton Remand Center.  All outgoing calls from inmates were recorded.

On the call, Amber is heard repeatedly asking the driver where he is taking her.  She even states, "You'd better not be taking me anywhere I don't want to go."

In 2012, RCMP released to the public only one minute of the entire recorded phone call.  At the time, Amber was still missing.  Sadly, just four days after the audio was released, her remains were found on September 1, 2012 by horseback riders on a rural property near Leduc County.

According to an RCMP spokesperson, the discovery of Amber's remains so soon after the release of the audio was, "entirely coincidental."

The entire recording is 17 minutes long and Amber's mother, Vivian (Tootsie) Tuccaro, has heard it all.  According to Vivian Tuccaro, the call ended abruptly with Amber sounding scared.

Listen to the audio released by RCMP (from CBC News):


Amber Tuccaro was of indigenous descent, from Alberta's Mikisew Cree First Nation.  Her case is part of an alarming number of missing and murdered indigenous women in Canada.  To learn more please visit the following link from CBC News:

Amber's family maintains a Facebook site, Amber Alyssa Tuccaro Memorial Round Dance, in honor of her memory.  Please visit it for updates and more information:
https://www.facebook.com/AmberAlyssaTuccaroMemorialRoundDance/

In addition, her family has also established a "Justice for Amber Tuccaro" Facebook page:
https://www.facebook.com/JUSTICEFORAMBERTUCCARO/

It has been more than 5 years since Amber's death.  The unknown male driver who gave her a ride has never been identified.

There is a $5,000 CAD reward for information leading to an arrest in her case.  Her family is working on increasing this reward.

Amber Tuccaro's family publicly released portions of the review "in an effort to help other families of missing and murdered Indigeneous people."