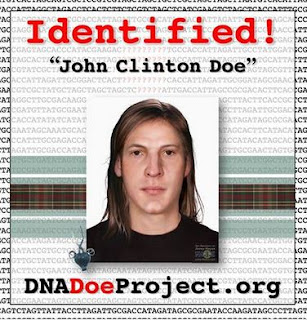 Authorities determined that the remains were that of a white male, 17-20 years old, about 5'6" in height and weighing approximately 140 lbs.  His hair was brown and straight, at about collar length. His eye color could not be determined. His cause of death was also not determined.  He had died in the fall or winter of 1994, about a year before his remains were found.
Items found with John "Clinton" Doe and his clothing may help identify him.  He wore a black and gold "Venom" band t-shirt with the band's first album cover ("Welcome to Hell" featuring a ram's head in a pentagram.)   He also had a handcrafted pendant made from a metal fork and shaped like a "goat's head." He wore a plaid jacket, camouflage pants, Nike Air Bound basketball shoes and an Aquatech watch.

In 2014, the Smithsonian's Museum Conservation Institute donated its services and provided stable isotope analysis  of a fragment of John "Clinton" Doe's femur.  According to a Smithsonian Insider article, "oxygen isotope values... in bones indicate the geographical region where a person lived."  Interestingly, these oxygen isotopes get incorporated into our bodies via drinking water, which has distinct identifiers.  Once the analysis is done, scientists pinpoint a geographic location by comparing the results in a database that features drinking water values from around the world.

The Smithsonian determined that John "Clinton" Doe had lived in Wisconsin, Michigan or Minnesota.

In some ways, the story of the search to identify John "Clinton" Doe has also become a story of determination and dedication by the lead searcher, Jack Friess.  Friess had volunteered with the Rock County Coroner's Office on the case for more than a year when he received a notice in April 2015 that his services were no longer needed by the new medical examiner's office.  He proceeded to create a private, nonprofit, investigative agency named New Look Investigations.

In February 2016 he discussed with WMTV NBC 15 about a new composite featuring a younger version of John "Clinton" Doe, in his teens.  A new theory is that the unidentified young man may have lived in a foster home and aged out of the system.  If that were the case, it is possible that a missing person's report was never filed.

It is important to note that there is a possibility that this John Doe is also the same person dubbed, "River Guy."  Early in the investigation, eyewitnesses came forward to state that a young, intoxicated man was seen along the Turtle Creek, near where the remains were found, in October of 1994.  "River Guy" has not been identified.  He was heard yelling at bystanders and saying that a woman named, "Mary" had either left him or upset him.  More on "River Guy" can be found at http://findjcd.org/


If you have any information on this case please contact:


For updates on the case visit:
http://findjcd.org/